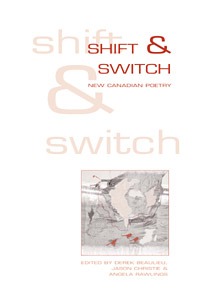 It seems 2005 is shaping up to be the "Year of New Canadian Poetry" and canon-revising anthologies - first my own section for New American Writing this spring, then Sina Queyras' Open Field from NYC, and soon, The New Canon from Carmine Starnino, and, altogether less-expected, Shift & Switch: New Canadian Poetry. As a long-time enthusiast of the anthology, I am particularly pleased to see this series of alternate publications unfolding.

The introduction, by the editors, contains the following by Jason Christie:

"Most introductions include all manner of caveats to anticipate or deflect criticism, to comfort egos that may have been bruised during the selection process, etc. Editors often apologize for what isn't included in the anthology and why it wasn't included. In introductions to anthologies where the editors presume to a project of capturing distinct, new voices, of encapsulating a new generation of writers, or ensconcing an elderly, threatened generation in a monumental marble edifice to weather the wreck of centuries, such editors must address the connotations of their pomposity with caveats. We offer no apologies because we are not attempting to suggest our anthology establishes boundaries, exhausts possibilities, or captures an entire future literature in the gestational state of its potential. Shift & Switch is not a complete catalogue of New Canadian Poetry."

My comment here is that S&S is most certainly not a complete catalogue, and its ruptures, aporias, holes, absences, vacancies, discrepancies, revaluations, shiftings, etc., may be invaluable, but the collection has done itself a disservice - it seems to me - by failing to include a number of Canadian writers, like Meredith Quartermain, Sina Queyras, Ray Hsu, Alessandro Porco, and many others, who indeed are practitioners of work which is not within the lyric Canadian sublime.

"Writing is alive, mutational, impermanent, flexible, and explosive rather than reductive, static, rigid, and entombed; writing is a dynamic system rather than an hierarchical tree. We would sever the thin lines that connect our anthology to a current tendency in Canadian letters toward community instead of toward sects, a movement toward inclusiveness and encouragement instead of exclusivity and elitism by pretending to such an impossible and false endeavour as Canon-building. With this anthology, we partially demonstrate the variety of talented writers currently underrepresented in Canada. We are not responsible for 'discovering' or 'uncovering' any of the writers in this anthology: we were fortunate to have had the chance to come into contact with their work and are eager to share their work with you. I believe that with this anthology we have a chance to sidestep lineage-bound and fraught notions of patriarchal literary inheritance with which we've been nurtured, to find a warmer intelligence than the cold austerity of reason."

This sounds to me like an attempt to reach Bernsteinian post-modernity without working through the modernity of Early T.S. Eliot - which is indeed a fraught project. Writing is both static and dynamic (it is in fact a dialectic) at times, and there is a tradition, albeit one which shifts continuously. It isn't clear to me whether they are celebrating elitism or inclusivity, community or sects - I read it as saying they wanted sects and elitism - presumably arguing that a quietism lies the other way. As one of the fathers of several inclusive, eclectic, broad church anthologies, I actively disagree with the total abandonement of community for sects - although we should all mate on the high crags with our own kinds, as poets, following Stevens, arguably. On which note, I should add, this anthology is curiously confrontational of the idea of "Canada" - in favour of a strongly American form of "innovative practice". Such a shift was essayed before, notably in the 60s (see the essay on Bowering in the latest issue of Jacket by Canada's own rob mclennan).

My own feeling is, Canadian nationalism, in terms of poetics and publishing, should be certainly interrogated by international sympathies (as I have) but not so far as to dispense with a grasp of the socio-political and literary-economic realities, pressures and burdens of history, writing, and "Canada" as these ideas intersect - in short, there is a Canada, and it has poetries of its own, whose strong point is also its weakness: it always tends to resist the best of international writing, while seemingly investing its efforts in aping what is weakest in foreign models.

Rather than abandoning all interest in the lyric, the tradition, form and so on (we might as well abandon the poem while we're at it) a blessed recovery is in order. The poem, as written in the UK, and Ireland, for instance, is alive and well, and sometimes rather lovely for its interest in voice, metre, and music. Much of what is best in the human being (if such a thing still exists for these editors) nourishes, and is nourished by, the lyric imgination, which, if extended in an Ashberyian fashion, can contain flow, wit, experiment, and delight, without recourse to "math".

I look forward to reading this...