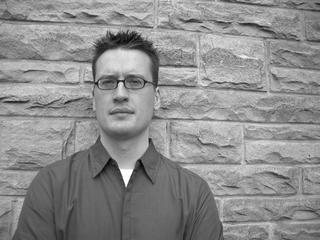 Steve McOrmond’s poetry has appeared widely in literary journals and magazines across Canada, as well as online at Jacket (Australia) and Nthposition (UK). His work also appears in the anthology Breathing Fire 2: Canada’s New Poets (Nightwood, 2004).

His first book of poetry, Lean Days (Wolsak and Wynn, 2004) was short-listed for the Gerald Lampert Memorial Award, which recognizes the best first book of poetry published by a Canadian in the preceding year. A second (fine) poetry collection entitled Primer on the Hereafter came out in 2006.

Originally from Prince Edward Island, McOrmond (pictured here) currently lives in Toronto. Eyewear is very glad to have him here, as he is undoubtedly one of the forty or so most compelling younger poets now writing in Canada today.

To dwell between the snowy fastness
and the ice-locked sea, in a city of blondes.

One must have heard the existential scream,
hands over ears, the huge Os of mouth and eyes.

Know it can begin with nothing more extreme
than the flat’s creaky floors, the old radiator ticking.

A fragile ecosystem: The furless, burrowing heart
and the Allen key of the mind.

Eventually, one might acquire a taste for hardcore
pornography and cod roe paste in squeeze tubes.

Held hostage in the bank vault of winter,
the captive will identify with the captor.

However peacefully it seems to fall,
there is suppressed violence in the snow.