THE KILLERS HAVE A NEW ALBUM 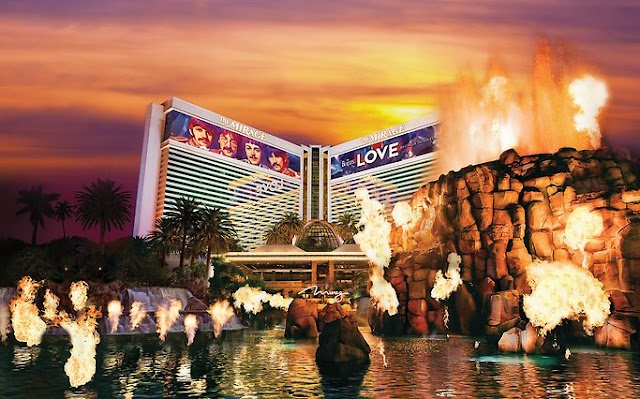 Imploding The Mirage, as critics and reviewers will quickly inform you, is a title that refers to the famous Las Vegas casino's demolition, which made way for something arguably even snazzier, or more empty. Born in Vegas, that most artificial and symbolic of American places (famous for gambling, glitz, misadventure, criminal origins, and mass murders), The Killers - named after a Hemingway-based film noir, but following in the footsteps of numerous rock acts that have signalled their outlaw claims with similar names (Jerry Lee Lewis was called The Killer) - are a very American rock band. That their lead singer, Brandon Flowers, is famously a Mormon and allegedly a straight arrow, albeit flamboyant on stage, only adds to the resonant enigma - they are part of the myth of the American Dream, while in classic post-modern mode, nod to the artifice, albeit a non-nihilistic one with a God.

Their inoffensive, hummable songs, mainly about broken hearts, yearning, broken lives, and hoping for new starts and new breaks, have settled into the same blue collar zone one felt Tom Petty, John Cougar Mellencamp, and Bruce Springsteen have seen as their sweet spot. It is a form of rock that builds on folk, and so Bob Dylan is also a presiding spirit, as are the many African American blues and rock pioneers of genius who made rock an American art form. What makes The Killers intriguing is that they were formed in the near aftermath of the 9/11 moment, until 2016, or 2020, the darkest moment in 21st US history; and that their initial sound owed a big debt to modern British new wave, indie acts from the 80s and 90s, who told stories with a synthesizer sound. That these acts paid homage, often, to an earlier, classic Motown America (as in 'Tainted Love' or almost all of Depeche Mode's Violator album) was the point - The Killers were bringing the style back home, to the desert.

The three biggest British/Irish rock bands of the past 40 years to Top 40 break in the USA have probably been Duran Duran, Simple Minds, and U2; add Coldplay if you wish. All had their biggest hits by referencing American songbook themes, with often religious, or transcendent aspects; and all built on the U2 Joshua Tree moment, which directly imagines the band in Vegas. The new Killers' album has all the leitmotifs of all this post's aforementioned artists, and throws in The War on Drugs (a deeply Dylan-Springsteen influenced act), Fleetwood Mac, K.D. Lang, and Eagles MOR drivetime.

None of these artists, except maybe SM, Lang and DM, have ever been really very indie, and neither have The Killers been. They were always a BIG ACT. Nothing wrong with that. Their ambitions were achieved, and they have become the top-selling American soft rock group of the past 20 years. In some ways, they are the American Supertramp. Radio-friendly, hugely popular, but little-respected artistically. The debate rages as to whether the pomp and grandstanding is earned, or shtick. The way to enjoy the new album is simply to listen to it as if one was driving across the desert to Los Angeles, windows down. These are songs for stadiums, for cars, for people on planes that need some optimism in their earphones. It is large, generous, democratic, and undemanding guitar pop, to lift spirits, and stir some blood. 'My God' is arguably the most political song, but the whole album is drenched in beaten-down folks standing up, finally, to get what's coming to them; blessed with God's backing, and, even when 'the dreams run dry', standing by the side of some angelic figure. As Flowers reminds us 'we're all gonna die' - so, yeah, Carpe Diem.

And that's what you get listening to these ten calibrated anthems; it's corny, it's old school, but it works, if you have stumbled, and need a pick me up. As such, I'd say this is a critic-proof production, unless you want to seriously ramp up your bell hooks. Which is certainly a worthwhile thing to do.

Yes, it's too white, too male, too Christian, to be representative of the true American diversity - but it does reproduce a true American sound, that has managed to bring diverse groups together. And that's, at the end of the day, spiritually-enriched blues and rock, made by Black Americans. The album is not great; it has some fine moments. It does come from a great tradition or two, and though it lacks many ideas, its contrived heart is no less sincere than a toy's clockwork innards, that do make the motions that move us when we are young.