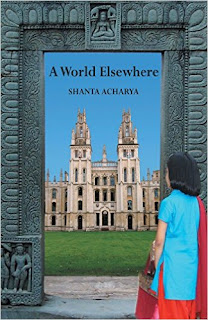 A World Elsewhere, by Shanta Acharya, is a novel about India, in particular its conventions regarding women. Although the English it is written in is faultless, its style is as Indian as a film by Ravi Shankar – which is no mean feat. This book is an excellent read but it is necessary to remove Western spectacles and imagine oneself in the faraway country it's about as if it's your own, in order to glean its conventions as if you are a native. Attitudes toward women are strange everywhere of course, and wife-battering, for instance, is not unknown in the West – far from it! – but the particular justifications for being cruel to women are as different from one country to another as their languages.


This novel is placed in Orissa, India. Acharya intersperses Indian words within English sentences and, although there is a glossary at the end of the book, I found I was able to read them in the text almost as if they were English. Strangely they are clear expressions although untranslatable, sort of like French or Yiddish expressions in an English text, and accepting this makes the reader feel sort of at home in the subcontinent. I found it a warm, welcoming device.
The heroine, Asha, is a brilliant and beautiful girl who grows into young womanhood within the pages of the novel. Her family is Brahmin, which is the highest caste in India – and while the caste system is no longer legal, it still functions in custom.
Asha is the second child in her family, the first a boy; two more boys are born after her. Her mother, Karuna, and her father, Aditya, are also central to the story. The author has analysed them well. She notes that their marriage was arranged by their families, as is customary in India. Asha is bothered that her father is 12 years older than her mother. That there is a discomfort between the two is not obvious to begin with, but unreels for the reader gradually.
Asha thinks it is necessary to marry someone one's own age and  of one's own choice in order to be 'in love', as if lack of personal choice were the only problem between her parents. And so she (wilfully) chooses a fellow student at her university, Anaan, who is handsome and woos her with books in which he places love-notes. Apparently they both agree about marriage – that it should be by choice and no dowry should be attached to it. Anaan is of a slightly lower caste and has no job; Asha's father. a university teacher who earns enough money to support the family but not enough for a dowry, does not approve of that custom in any case. Asha forces her family to accept Anaan for her husband, and then great trouble ensues.
Underlying this story is an underlying conflict between India's ancient customs and, in a sense, Bollywood movies. Marital discord occurs in the West as well as in the East, of course, and seems to have little to do with how the marital partners were selected. But the laws and customs oppressing women may arguably be stronger in India. For instance, a married woman voyaging to another country could not do so without her husband, at least in the time-frame of this book.
But I do not want to spoil your reading by giving away the story completely. This is a fascinating novel, well told. If I have one quibble, it is that Asha is depicted as a beautiful girl, but we have no further description of her, and so that doesn't sink in – or at least, it didn't for me. I did find her a bit too perfect to be real. But her passion and angst are clearly drawn, and so are her parents in all their imperfections.
I am looking forward to the sequel!
Leah Fritz is an American writer in London, whose poetry has been widely published, most recently by Salmon.