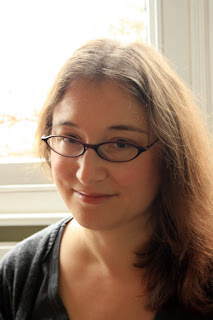 Eyewear is very glad to feature a poem by Joanne Limburg this Friday.

Let us now magnify and sanctify the name of Him who made and warned us,
according to his Will,

who placed in us our soft or hardened hearts,
then blessed or punished us for what they made us do

who put an evil spirit into Saul, then gave a song to David
so he could drive the spirit out.

Let us bless and extol Him, exalt and praise Him,
who, beyond the reach of any song performable,
commands us still to sing.

Limburg was born in London in 1970, and read Philosophy at Cambridge. She won an Eric Gregory Award in 1998 and published her first collection, Femenismo, with Bloodaxe two years later. She has since published a second collection, Paraphernalia, which was a Poetry Book Society Recommendation. The Woman Who Thought Too Much, a memoir about OCD, anxiety and poetry, came out in 2010 and was short-listed for the Mind Book of the Year Award. She is currently working on a historical novel and a book of children’s poems, the latter because her son told her she had to. A new poetry pamphlet, The Oxygen Man, is due out from Five Leaves Press next year.
featured poet

As someone who read Philosophy at Oxford and also suffers from (mild) OCD, anxiety and poetry, I might well take a look at Joanne's memoir 'The Woman Who Thought Too Much'!

Anonymous said…
Thanks for this. Perhaps 'warned' is a typo? I can't help reading 'warmed', which might suit a creator who winds his clockwork toys, then sets them free to stumble.