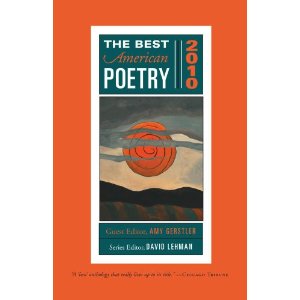 
An idea circulates that American poetry may be less concerned with form than its British counterpart (see the debate in New British Poetry, ed. Simic & Paterson, Graywolf Press, Minnesota, 2004, pp. xxi & xxiii). I would suggest that in the context of BAP this observation isn’t entirely true, unless there’s a tacit understanding that “form” is defined only in its narrowest sense of fixed, “traditional” forms (ones that perhaps use regular rhyme and metre). I’d suggest BAP is deeply concerned with form in its most long-standing sense – pattern, repetition / variation, shape – in ways that would be very familiar to readers of mainstream British poetry. Perhaps the difference is that the various poems presented in BAP 2010 are more formally wide-ranging and bold than we often find side by side in mainstream British poetry (without being unapproachable - only two or three poems in BAP are extremely “avant-garde”).
Similarly the point has been made that American poets are less likely to be “voluptuaries of words” than British poets (see Simic & Paterson, p. xxi). A reader of BAP 2010, I would suggest, would resist agreeing with this idea.
So BAP can be seen to coincide with British readers’ tastes in many ways, while still pushing poetry’s boundaries. It offers a good, alternative model for adventure within the mainstream, while accessible and entertaining, and not simply in terms of quantity and range of poems. What we are given in BAP time and again, is the poem as attentive botanist and the poem as pioneer, travelling fearlessly Into the Wild.
There are 173 pages of poems here, plus a 45 page appendix of fascinating short commentaries by the poets (as well as useful introductory biographies). Add to this two good-length essays by Lehman and Gerstler which examine the poetry agenda. Rumour has it a British equivalent of BAP is on the cards, and by all accounts it will be a very welcome addition to the annual poetry calendar this side of the pond.

With each annual anthology of this kind, it is surely more than a purely competitive “Best Of” element which seduces us. It is the sense of comprehensiveness, that this process has required exhaustive research. When I read through a newspaper’s end of year “Best gadgets of 2010” I want someone else to have put some hours in, enduring the hard labour, so I can put my feet up for the weekend, lounge back like a true Poetry Royal and enjoy the pick of the poetry-caviar being spooned ceaselessly into my mouth.
The lasting impression of this book is a sense of sheer generosity and scope within its pages - each year BAP offers a welcome introduction to a new, or simply different, world.
Mike Loveday is a British poet.  He is editor of Fourteen Magazine, and completing his MA at Kingston University in Creative Writing.
Best American Poetry guest review