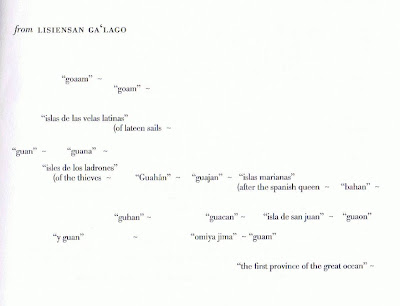 Stand against? Line in the sand? Declaration for? Marker to counter other markers? Too much legislation, already, from without? George—not that one—Oppen reminds us that poets are the legislators of the unacknowledged world. Thus, poets' produce is—ideally!—new rules in the service of what was overlooked, silenced, missed, stifled, fragmented, lost, killed. More boldly: poetry does write the laws of and out of the margins; not in the sense of legitimating the model of "core as centre/centre as core" but rather in the sense of "poetry fills in the so-called 'blanks.'" Maybe?

Anyway, have you read from UNINCORPORATED TERRITORY [hacha]? Do you know this cat Craig Santos Perez? Here's a project, and a poet, that allows poetry to work in the intrepid service of reclamation—to use language against instrumentality; to trouble the certainties of geographical "location;" to meet imperial and colonial "territoriality" with the speech of redress and restoration. One wants to say—I want to yawp it—this is what poetry can do!

To cut to it, from UNINCORPORATED TERRITORY is a poetry of history—as such it demonstrates how those language-games of "official" [military; medical; religious; pedagogical] information may be beautifully and hauntingly disrupted. So Santos Perez's title suggests that from the beginning his beginnings were complicated by a speaking out of a place (Guam) with a complicated history of occupation and one continuing under US jurisdiction (and more generally under the ongoing threats of colonial/military presence).

This poem begins with the problem or terrors or realities of territory/place especially as that problem or terror or reality is born out of the violent legacy of colonial "ownership." Check this out, Santos Perez weaves critical scholarship, historical records, fascinating multi-lingual etymologies, government records, military documents, family narratives, recipes, diverse poetries into a mesh-like counter-document… and not ever in the service of a self-regarding post-modern practice, either! Instead, like the experimental poetries of Peter Dale Scott or Rosmarie Waldrop or Eliot Weinberger or Jeannette Armstrong or Theresa Hak Kyung Cha or Aimé Césaire, or the experimental films of Peter Watkins or Alanis Obomsawin or Abigail Child, from UNINCORPORATED TERRITORY becomes its own strategy of resistance—a thing to use to help move the imagination and the body beyond imposed absences and enforced silences.

Santos Perez's invokes the term "réduccion"—which, he tells us, is the historical Spanish term for subduing the natives of Guam. And what is so superb in from UNINCORPORATED TERRITORY is how the poems themselves confront "erasure" and work so robustly with and then against a condition of diminishment. That is, in a visual- and in a breath-sense, Santos Perez uses "absence" and space dynamically (note, the formatting is lost in the version below, see the image above for accuracy):

"the first province of the great ocean" ~


Here the opening page of the poem demonstrates an archipelago, so to speak, of sounds and signs and absences that call attention to Guam's colonial history and also to the still-living, undefeated Chamorro language. What is also so thrilling here is how Santos Perez performs the "action" of an avant-garde project. His use of fragments, for instance, is clearly a direct result of, on the one hand, a colonial school system that has attempted to eradicate native speech. Yet his use of pieces and ends and bits is, on the other hand, also an inheritance from the likes of Gertrude Stein and Samuel Beckett. The exhilaration—for me at least—resides in seeing how one might use innovative modernist techniques to uncover contemporary truths about the workings of colonial power and subjugation. If, as Stein says, "This is what history teaches, history teaches," from UNINCORPORATED TERRITORY illustrates how history-as-educator can be checked and gainsaid by a poetry that is constantly upending historical "facts."

The section entitled "from Achiote"—which tells the story of the achiote plant and uses it as a metaphor for knowledge production and knowledge imposition—is tour de force. Santos Perez recalls working with the plant with his grandmother and then he proceeds to laminate more and more texts about the historical proselytization of the native population by Catholic missionaries (especially Father Sanvitores) atop his initial narrative:

in tumon, you can stay at the Hilton, Westin, Grand Plaza, Marriott, Hyatt, Holiday Inn—the hotels are located off Pale' San Vitores Road which runs parallel to Marine Drive which was renamed Marine Corps Drive

It seems to me that this is the kind of text that reveals how much of our debates about official verse culture vs. the post-post-avants, for example, or the lyrical I's against the experimental Its are ridiculously misplaced. from UNINCORPORATED TERRITORY does not shy away from apprehending moments of high-lyrical beauty nor does it trouble itself with diluting its use of puns, parataxis, or concrete poetry. The effects and urgency of the book do not, I think, lie in its aesthetic allegiances but rather more wholly in its ambitious desire to "recover" voices and honour the future.

This is a visually stunning book, too. Check out the simple, radical cover! Santos Perez, Tinfish Press, and designer Sumet Viwatmanitsakul, have created a striking but admirably understated layout. I love the greyish-coloured font which, to my thinking, resembles the tint of old fishing nets and achieves the "mesh eye" quality that Santos Perez invokes in another poem: "to change your eyes depending on the thing hunted." And Santos Perez's detourned maps and charts of Guam are exquisite.

Finally, I want to emphasize that this is a text strong enough to invoke Paul Celan and Césaire and Kyung Cha without any fear of sinking its own vessel. Indeed, these invocations—of other writers themselves so obsessed with questions of difference and survival—work as apposite spirit-guides. This is a first-rate, contemporary book of poetry. This is a text infused with vision and political purpose. It's rad.

I've just recently become aware of Knucker Press and their unique book and chapbook projects that aim to match-up writers and artists. The word/image mandate is exciting and James W. Wood's poetry pamphlet, Inextinguishable, is a fine example of successfully marrying text and painting. This particular poetry book boasts the author's spare and evocative lines alongside the full-colour visual work of fourteen artists. The opening poem "An Fraoch Mhor," and accompanying image (by Elise Tchoukriel), are wonderful. First, a reader is met with Tchoukriel's vivid, Matisse-like painting on the left-hand page. Her image, in terms of colour, suggests great joy and yet the collage-effects and position of the face render the picture more pensive. And so Wood's rather Byronic opening "I walked in rain / looking for heather" functions smartly alongside the rich image. Most importantly, Wood's lines arrive so gently and with such easy pacing that he manages to convince his reader (me!) that this walk is not just a predictable poet's stroll in the wet stuff. Instead, he transitions in stanza four with "In my memory, the gorse / and heather seemed higher." This is, arguably, not that remarkable of an image but note how Wood closes the piece by blending his meditation on memory and love with the image of the flower: "Let memory go now / for in this flower I hold / the things that I have learned / and the first love of the world." I think this is a startling exit on a number of levels. First of all, the reader is no doubt expecting a kind of melancholic celebration of the powers of memory and yet Wood suggests that memory should, in the end, be chucked! This poem is audacious and smart as it, I gather, reworks quietly Blake's "Intimations of Immortality" poem and simultaneously fastens on to it a carpe diem sentiment. Pretty impressive in four little lines!

While there are a few poems here—"After She Leaves" and "Summer Term", for instance—that I am not sure make the same discoveries as the above, there are a number of individual poems and lines that are just as extraordinary. In the four-line stanza sets of "The Wandering Horses," for example, we begin with "The eyes of a horse in a field." Again, Wood's style is so clean and disarming! And I love his suggestion a few lines later on that, "But for her / there is no doubt: birth comes quickly"—that's a breathtaking insight about our "animal other." But later on in the poem Wood writes that, "Somewhere / beyond what we see, her folklore // riddles these fields" and while I find nothing egregious here my hunch is that that "Somewhere" and that "beyond" and that "we" and that "riddle" are not quite as tight as they might be. That is, because Wood is so gifted at just saying what happened (as Lowell said), when the verse moves too obviously towards "the poetic" there is, I think, a slight hiccup.

Yet this is a tiny complaint. As I say, much of this collection hums with an accomplished and intelligent poetic vision. Here is the close of Wood's remarkable short poem entitled "Thirteen,"

what the foolish
put their hope in, how we are, what we call
the things we feel; the name we give
to all we'll never know: a number—thirteen.

Many poets, I reckon, would long to have such rhythms and to complete a poem with so much generosity and yet also with so much wisdom.