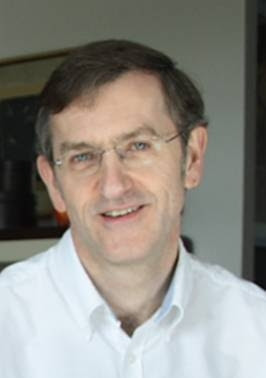 Eyewear is very pleased to welcome Alan Baker (pictured) this first Friday of the New Year, by featuring a poem of his that is all-too-seasonally apt (some parts of the UK have not been this cold or snowy in two decades).

Baker was born in Newcastle-upon-Tyne and lives in Nottingham. He co-edits Leafe Press, which he founded in 2000, and is editor of the webzine Litter. Publications include The Causeway (1999), Not Bondi Beach (2002), both from Leafe Press, The Strange City (2002) from Secretariat and Hotel February (2008) from Bamboo Books of California.

His translation of Yves Bonnefoy's Début et Fin de la Neige was published jointly by Leafe and Bamboo Books. He has a pamphlet forthcoming from Skysill Press.

Baker represents an alternative ("other") British poetry tradition, and poetics, that, often quietly, in the so-called margins of a mainstream, continues to do excllent work. Baker follows Pound's example, of course, of being editor, publisher, and poet. His work, apparently modest at times, turns the British lyric subtly, and offers new angles on how a line may be shaped, or allowed to spin off in another direction.

Today the snow, and tonight
it lies on my car, and on all
the roads that she must go.
To be in a warm hotel in midwinter,
isn't that enough comfort?
Today the snow, tomorrow
I will save you from the rest of your life,
or is it mine? I would like
to help someone to live after my death -
eyes, liver, kidneys, pancreas
left on the fields of morning
while I'm in a dreamless sleep.
What could be more idyllic
than an exhibitionof the latest luggage?
Are your shoes clean, young man?
One believes so. And who are we?
To argue, that is.
I earn a living, recount
colourful episodes from my past,
swell my feet on crystals of white.
Isn't that enough? But no.
'Our researches must continue'
and there are language courses
yet to be complete. The latest
adult films to be watched.
Slide softly into the bed of white.
Protect the night, snow,
and don't allow yourself to be fooled.