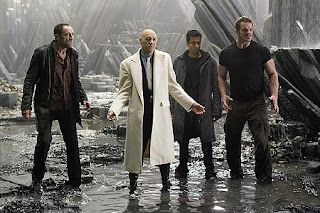 The holiday season may bring viewings of films missed during the hurly-burly of the year. In my case, among others, Superman Returns, which sank my heart, for a number of reasons, deep as the Mariano Trench.

Bryan Singer (the "y" was always going to be a problem) was the once-and-future-Fincher of American cinema, a great rising director. Instead, after The Usual Suspects, that bijou pic whose lustre is somewhat tarnished now that everyone's picked up on it, he opted for blockbusters. X-Men, etc., and now yet another "reboot" of yet another "franchise" (even using the jargon of film's industrial trade is an assault and battery on the mind), Superman Returns, as above.

It should have been called "Brando Returns". The production is ghosted by the expensive actor - his virtual reproduction haunts its halls, out-takes from the original "crystal seed" mirrored, replayed and echoed endlessly, like so much "the Force, Luke" stuff. But not only is Singer proud to play paycock with Brando's cinematic shade, he has allowed other homages to unaccountably cluster and multiply, like Mahon's mushrooms in a disused shed. For one, Eve Marie Saint, great opposite Marlon in On The Waterfront (and luminous in North by Northwest) becomes old Mrs. Kent, living on the same ranch as Mrs. Ryan (of the saved son in Spielberg's epic), and Lex Luthor's moll (a Parker full of Posey, husha-husha) is named "Kitty Kowalski", nodding subliminally to the sublime Streetcar.

Why do this, unless, at heart, one is sick of the artless nature of the enterprise? Singer's sense of direction is good, his visual sense strong (for one thing, he has borrowed heavily from Welles and Kubrick, in his use of silent framed space as well as space flooded with sound - see the hopsital sequence at the end, which refers to Kane, among other films) - but the script is a let-down, despite its clever deployment of a rich field of flight images and metaphors (ghosting 9-11 certainly), and the usual father-and-son routine.

No, the problem is Luthor. Kevin Spacey is one of my favourite actors. His physical deportment in the film is superb, choreographed to swing his megalomania like a bebop trombonist on horse. Still. Little thought (and this often happens with graphic novels when translated to screen) was given to the requisite gravitas of the villain - or more bluntly, his infrastructure. Three or four goons and a gum-cracking moll does not an army make, and Luthor's plan, admittedly meant to be insane, still does not seize the imagination, let alone colonize the imaginary, as it should - surely, stealing America from the pale-faces by resurrecting an Atlantian wasteland like some sort of submerged Leviathan is a clever Sex and Death in the American Novel trope, but where's the S & D? Billions are threatened with extinction, none die.

Luthor could not even outdrink the Rahv's in heat, let alone sublet a block in Manhattan, let alone conquer a timid new world. The way in which he "kills" Superman with Kryptonite is sufficiently wicked, but not much else is more than a bled-out reprise of the Gene Hackman performance first time round. Why do screenwriters insist on making the villains so undaunting? Armed only with a few stolen artefacts from the Fortress of Solitude and one helicopter, how does Lex expect to hold off the armies of the free world? In what way does he in fact "steal" fire from the gods (the best scene involves his brief lecture on Prometheus)?

More to the point (carping diem), if Kryptonite kills Superman, then Superman cannot lift it. He surely can't, then, lift a vast continent laced with Kryptonite miles into space, can he? He can. Oh. Okay, then.

Return of the repressed? As Superman floats in the ether, hearing, godlike, the pleas of humanity (a dictator brutally murdered here, a child blown up by a land mine there, a bank and its property threatened here) what is most absent is ideology, or any sense that the film is created within a system of capitalism. The German idea of the Superman, if I recall, was that he transgressed, or at least extended, human values - there was a transformation of ideology. American brute force has been shown to be incapable of lifting countries free from toxicity, let alone thrusting new continents (ho hum) - only new systems of thought can do that - Superman's persistent loner status, his reluctance to co-operate, or work in league with philantropists like Bill Gates (ha ha) renders him, perhaps, as useless as Lois Lane's prize-winning editorial would argue.
america film politics