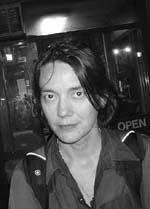 Eyewear thinks Sina Queyras (pictured above) is one of the most refreshing, innovative and provocative poets to appear in North American writing over the last few years, and is glad to welcome her here, today.

She edited the key book, Open Field: Thirty Contemporary Canadian Poets (Persea, 2005), which is one of the first anthologies published in America in the last few decades to consider the new poetry now coming from Canada. She is is the author of Slip (ECW, 2001) and Teeth Marks (Nightwood, 2004).

Her third collection of poetry, Lemon Hound, won the Pat Lowther Award and a Lambda Literary Award. Expressway is due out from Coach House in spring 2009. She is currently writer in residence at the University of Calgary where she is working on several projects including Autobiography of Childhood, a novel.

11.
This happened before. Then we ran. And the cable
hooked us to a big Dish. We signed up for more. Golden
arches nosed up out of concrete and we were delighted.
Everyone bought a Ford or Chrysler. Roads appeared and
women disappeared down them. Millions were served.
Some of them waved. This happened before. Then again
maybe not. Anyhow once we walked to the television.
Once your little sister stood and changed the channel
from 2 to 3, one hand on the antennae. This really
happened. At the end of the line there was a person.
Whole lives ticked by on salaries. Everyone wore
polyester. Blouses with imprints of European landmarks
abounded. People dialed and the numbers rumbled like a
bank vault. Shag appeared in avocado green and harves
tgold penetrating every corner. Coffee tables thickened
over night. Lights morphed into plastic balls hung
from chains. Little girls rhymed couplets, index
finger poised, waiting for the plastic rotary to hit
zero. This really happened. Women clicking on manual
typewriters. Whole offices of scritch, scritch,
scritch and ping, ping, ping as the carriage released
and rolled up. How we embraced the correctable ribbon.
How we coveted white-out. Listen, once people sent
letters with words crossed out. This all happened.
People placed vinyl on turntables and lifted needles
jumping slightly when the scratch blared out of the
cross hatched speakers from Radio Shack or Sears.
Rumors of a Japanese take-over surfaced. There was
talk of importing fathers. Then again maybe I am
lying. Anyone knew it was true. Anyhow we didn't run.
We bought bigger cars and women embraced the MuMu.
Everything was arriving all at once. Lapels sharpened.
Soul music sweetened the air. People drove their cars
to Drive-ins and hung aluminum speakers on the side
windows. How we embraced the wire.
poem by Sina Queyras
Email Post
Labels: featured poet