Sophie Mayer On Harry Potter, End of an Era 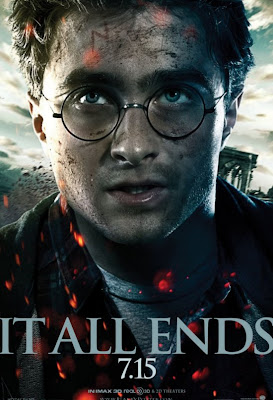 In the Guardian yesterday (19th July), Peter Walker and Charles Gantregarded what has become a virtual media monopoly in the UK – much maligned by some – and asked what will be missed when it’s gone. Not The News of the World, but the Harry Potter franchise. While the losses to the UK’s filmmaking economy and skills base are being totted up, as a teary-eyed viewer I found myself posing the question critically: what will I find myself missing when there is no HP 7.75 or 9 rampaging through next summer’s schedules?
It’s a question with two aspects: the film and the series, not least because – unlikeLord of the Rings – it is not an auteurial project, but (almost) an old-fashioned studio film series, albeit one helmed most ably by David Yates for the final four films. The plot of the final film (and indeed the whole arc), that good triumphs over evil through its commitment to love, and its willingness to lose what it loves in order to protect larger concerns, is a well-worn one, albeit more appealing than the ‘crush, kill’ narrative arc of, say, Transformers; likewise the story of the lost child who becomes, through scholarship and friendship, a hero.  The films have driven, and felt driven by, technical and economic, rather than narrative or artistic, concerns, but what Yates, following Alfonso Cuaron’s Prisoner of Azkaban, brought to the films is a grounding in both the real and magical worlds, with a strong, vivid use of locations (such as Malham Cove) enhanced by the use of digital effects to serve, rather than propel, the film. Yates’ distinction, from Order of the Phoenix onwards, has been his ability to balance strong direction of the human and digital elements of the film, managing a combination of visual panache, dramatic action and character engagement that the first two films sorely lacked.
Yates has been praised, rightly, for his sensitive direction of the young actors who have grown up on screen (not only the central triumvirate, but also Matthew Lewisand Tom Felton who play key dramatic roles as Neville Longbottom and Draco Malfoy, reflecting aspects of Harry as an orphaned child, and one burdened with parental expectations, respectively). But perhaps the greatest contribution of the film series, as distinct from the inventiveness of the book (there are few devices more narratively and cinematically rewarding than the Pensieve), has been its use of its ensemble cast of British stage and screen stars. A dizzying array pop up in the final film (sometimes too dizzyingly: Hagrid, once a core character, barely gets to say ‘Arry!), fleshing out the world of Hogwarts and its distorted reflection in the Death Eaters (who have far fewer stars on their side), not least in cameo turns from John Hurt as wandmaker Ollivander (managing to stay just this side of camp when evaluating a wand as... unyielding) and the wonderfulKelly MacDonald stealing a key scene as the ghost of Helena Ravenclaw.
The film is particularly striking in allowing the finest of the longhaul ensemble cast to have their moments of guts and glory: Maggie Smith as Minerva McGonogall is given the electrifying moment that her character (and stature as a performer) has always deserved, in her confrontation with Alan Rickman’s Snape, at his most effortlessly, sneeringly unpleasant. She moves from trembling to triumphant with real conviction – although the audience responded more warmly to Mrs. Weasley (Julie Walters) when she strikes back against Bellatrix (Helena Bonham-Carter, who has a very funny turn as Hermione-on-polyjuice-potion: Bonham-Carter captures Watson’s gawky politesse beautifully). McGonogall’s triumph is notable not only for its resonance – which bullied child hasn’t dreamed of the teacher who will see off the tyrannical headmaster? – but for being, along with Neville’s Last Stand, the good guys’ best moment in the film.  Snape’s death, while underplayed elegantly by Rickman, is hurried past in the rush to get his tears into the Pensieve and thus redeem him.


Peter Bradshaw commented on Return of the King that it lost momentum and grip because it lacked a recognisable and terrifying embodiment of evil. That’s not an error made by Yates or Rowling (although the battles in the film do seem somewhat cut-and-pasted from the defence of Gondor), as previous uber-villain Lucius Malfoy (a convincingly harried Jason Isaacs), like Snape, is pointedly humiliated by the biggest bad of all: Ralph Fiennes’ Voldemort. After being a whisper and a thought through most of the films, Voldemort finally emerges fully as a character, taking over from Bonham-Carter’s Bellatrix and the meanest, most mannered and deliriously weird villain. Fiennes’ every gesture is calculatedly inhuman, from the way he curves his fingers around his wand (really thinking physically about what it’s like to have talons) to his snaky, gliding walk. But his performance, along with brilliantly subtle make-up, are at their best in the film as he becomes more vulnerable with each Horcrux, containing part of his mortal soul, that is destroyed.
Fiennes owns the final film, triumphing as a performer where his character fails, and after his dissolution (via a rather underwhelming effect), the film loses pace and focus, never managing to answer the question of why evil is so charismatically compelling – or how to address the uncomfortable fact that the good guys are compromised, as Dumbeldore uses both Snape and Harry to his own ends, and at risk of their lives. It does, however, provide a heartfelt argument for the compelling qualities of the series. After Harry has let Voldemort strike him down, he meets Dumbledore in a place much like King’s Cross station (complete, in a wry touch, with uncomfortable benches). Rather than ask the hard questions about the nature of good and evil, they maunder about expositing (a problem that none of the films quite shakes), until the very end, when Harry asks whether the scene occurring is real, or all in his head. “Of course it’s in your head,” responds Dumbledore with a glimmer of Michael Gambon’s traditional twinkle, “but why should that make it any less real?” The consoling fantasy of fantasy and magic, from making light to summoning a vision of dead loved ones as the film does powerfully before Harry’s confrontation with Voldemort, is summed up neatly. Given the strong tradition of British realism, and the disdain for genre generally expressed by literary and cinematic critics on these shores, what I will miss most is the ringing endorsement of the brilliant power of the imagination to defeat the darkest imagination of power.

Sophie Mayer is a bookseller, teacher, editor and the author of two collections of poetry, Her Various Scalpels (Shearsman, 2009) and The Private Parts of Girls (Salt, 2011), as well as The Cinema of Sally Potter: A Politics of Love (Wallflower, 2009). She writes about film regularly for Sight & Sound.

Ben Wilkinson said…
Great review of a good film. Must admit I found The Deathly Hallows Part 1 a tad underwhelming, but Part 2 was impressive with certain actors putting in, as you single out here, some fascinating peformances. One thing I have to add though: the epilogue, set some twenty years in the future, is farcical, presumably unintentionally so. I understand that they had to run with the original actors - would have seemed odd if they'd cast older lookalikes for the final scene - but asking Radcliffe to grow some bumfluff and putting Grint in an oversized suit jacket didn't work. Funny as hell, but a little too much in the way of comic relief from the spectacular dénouement that precedes it.
Wed Jul 20, 06:36:00 pm 2011